Hit enter to search or ESC to close
Uncategorised

Late one night in early 2021, Laura Oldbury-Churchwood and her two miniature long haired dachshunds, Murph and Morticia, were involved in a terrifying road traffic accident that left their car completely destroyed. Thankfully, Laura survived the accident, and Murph and Morticia, who were both travelling in a MIMsafe Variocage dog crate, were uninjured, although understandably a little shocked.

Laura’s car was hit as she travelled through a crossroads by a vehicle that did not seem to even attempt to stop, smashing straight into the rear corner of Laura’s car, causing it to spin then roll 3 times before coming to rest in a hedge. The front of the car was crushed, the back was badly smashed, with the boot door so badly mangled it would not open and the back windscreen was completely shattered. Despite the severity of the collision, Murph and Morticia were shocked but completely uninjured. If they had been restrained in a different crate, they would almost certainly not have survived.

Laura described the accident to us:
“a car failed to stop at a crossroads, they hit the right rear corner of my car as I was travelling through the crossroads. I was travelling at around 50-55mph and it appears that the other driver made no attempt to stop at the crossroads (they missed the give way signs for whatever reason). My car spun around and then rolled 3 times before coming to land in a hedge/ditch. All of my airbags deployed and as you can see from the photos the rear windscreen was totally smashed (no glass left in the frame). My car had come to rest on a small tree trunk- this dented the boot close to the dog’s crate. “ 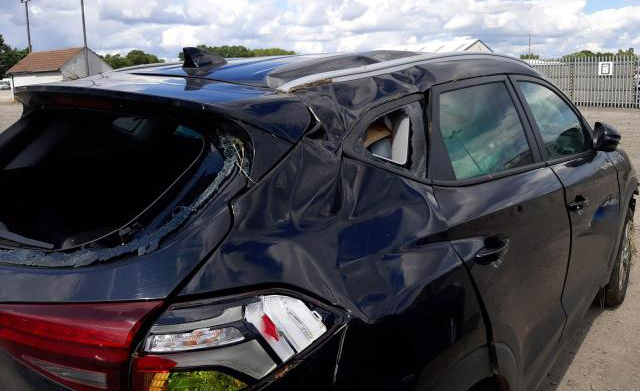 We know from our own crash testing, and research on road traffic accidents, that in collisions such as this, even in the unlikely event that dogs do survive such an impact, the shattering of the glass in the back window, which almost always occurs, is an additional hazard. Dogs involved in such accidents may get loose, and often run into traffic in terror, where they can be killed, lost or cause a further accident.

Laura went on to say:
“The dogs were shocked but otherwise not injured after the accident. I had to retrieve them through the escape hatch as the boot was not accessible. I hadn’t got out of the car at this point to see where I was.”
“Without doubt the MIMsafe crate saved my dogs’ lives. They would not be here today if it wasn’t for the crate! I try not to think about what could have happened if they were not in the crate. Everyone at the scene commented that we were all incredibly lucky to walk away from the crash without injury.”

Murph and Morticia were travelling in their MIMsafe Variocage MiniMax XL, one of our smallest VarioCage models, suitable for one or two small dogs. We were very happy to replace Laura’s crate free of charge, as we offer to do with any crates that are involved in severe road traffic accidents. Our priority is always the safety of our customers and their pets, and it’s best to replace any crate that has been involved in a damaging collision. 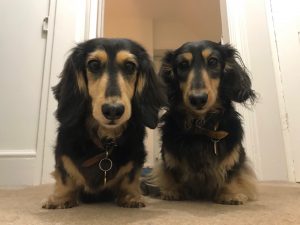 We’re the ONLY dog crate designer and manufacturer that carry out comprehensive crash testing, in which we test our crates in situ in the vehicles. This ensures that not only are the crates safe in standalone testing, but also that they work in tandem with the car’s safety features and crumple zone to keep dogs and humans as safe as possible. We also research real life road traffic accidents and keep extensive records of data to ensure that we are designing crates that will withstand many different eventualities.

Following the accident, very thankful and relieved to still have her dogs, Laura has been advising friends and family to purchase MIMsafe crates to keep their dogs and the whole family safe.

She told us:
“After the crash I told anyone and everyone about the crate. I’ve suggested to any friends that have dogs that they are worth more than their purchase price!”

Please visit our stand at Crufts, where we will have the crate that saved Laura’s dogs’ lives and kept her safe. Our stand staff will be very happy to talk you through the different safety features of the crate that protected Murph and Morticia, as well as countless other dogs in all corners of the globe. We’re situated in Hall 3, Stand 27, behind the Kennel Club stand, right near Discover Dogs.