Hit enter to search or ESC to close
MIMSafe Blog

Vimpan and his owner Sofia Karlsson, who was diagnosed with type 1 diabetes when she was four years old, contacted our Swedish colleagues about a Care2 crate and they were very happy to let little Vimpan try out one of our Care2 crates and hear his story! 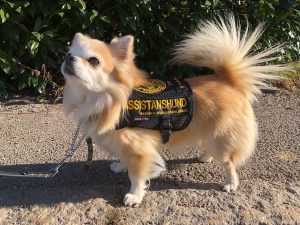 Vimpan came to live with Sofia when he was a tiny puppy. He enjoyed a very successful show career, winning awards in ten different countries. But Sofia wanted to keep on learning with Vimpan, and it was while completing a course in nosework that she had the idea to train him as a diabetic alarm dog.

“I called SBK and said that I wanted to train Vimpan as a diabetic dog. That surprised them a bit… training a chihuahua to be a diabetic alarm dog? It had never been tried before. Usually Labradors are trained for this task.”

However, she persuaded them to give him a try and they agreed to him taking an initial suitability test, which he passed with flying colours. He then went on to complete a further test, that measured his ability to learn and his social skills. To their surprise, it turned out that Vimpan was the perfect candidate to learn to be a diabetic dog!

Shortly afterwards, Sofia and Vimpan started the intensive training course under the guidance of a private instructor. It took them a year to become certified as a diabetes alert team, and they became local celebrities, opening the door for other more unusual dog breeds to start similar training. Sofia is rightly very proud of what she and Vimpan have achieved.

So, how is Vimpan able to identify when Sofia’s blood sugar levels are too high or too low?

Sofia explained: “I collected my own scents in sterilized jars. I used cotton pads with sweat and saliva when I had both high and low blood sugar. In this way, Vimpan learned to sniff out the odours that indicated my blood sugar is not okay. But what´s more, his nose is so sensitive that he can detect critical levels long before they actually become a problem.
“I´d say he can pick them up some twenty minutes before the measuring instrument on my arm.”

So how does Vimpan alert Sofia when her blood sugar levels are too high? 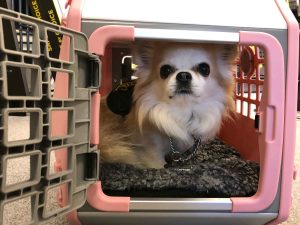 He carries a small tag on his collar at all times that he grabs and holds when he detects changes in her levels. Sofia added “If he does not have his collar on, he resourcefully picks something else that’s close by up, for example a shoelace or something else on the ground. It can be pretty much anything. But he never fails to alert me”.
And if it happens during the night when Sofia is asleep, Vimpan will jump onto Sofia’s bed
and wake her up by scratching her with his front paws.

While the Swedish MIMsafe team were hearing about Sofia and little Vimpan’s story, he voluntarily went into his new Care2 crate, curled himself up and went to sleep!!

Well done Sofia and Vimpan – it’s great to hear that such a small dog can achieve so much!!